It’s been almost a month since Collaborate took over the city, but our minds are still swirling with big ideas and plans. So, we figured what better way to condense the day’s learnings than with a good old-fashioned listicle? We’ll be talking Blockchain, banks, robots and how it’s up to us to design a better world. Read on for six of our favourite highlights from Bristol's best UX design conference.

First up comes Gavin Strange. As a director and designer at Aardmanimg

Animations, you can expect a brilliant bricolage of a mind with a side order of quirkiness, but that’s only scratching the surface. Gavin’s talk was a kaleidoscopic showing of animations, odd creations and soundbites more than worthy of inclusion in anyone’s morning mantra. He encourages us to approach all problems with enthusiasm and infectious energy. Be the amplifier, he tells us. Make things better. Play around. Learn.

But it was his appetite for experimentation that we loved most. It can be hard in a commercial environment to explore and test things out without a clear plan or destination. After all, there isn’t much room for mistakes on the client’s dollar. But this is why we have passion projects. 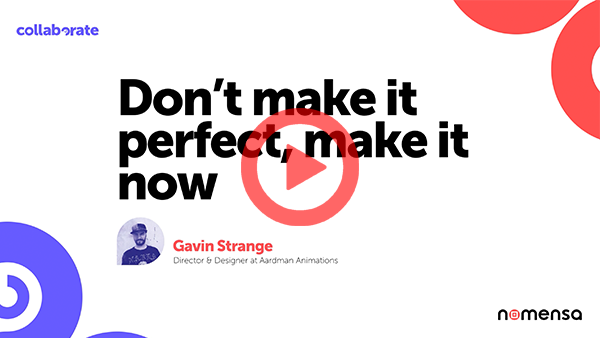 As practitioners, it’s our responsibility to keep trying out new methods, to rehearse and stay excited. I think of my talents like I would a muscle: they needs to be warmed up, stretched and taken out regularly for practice. Investing in passion projects makes us better at our jobs and more fun to work with, whether we’re writers, UX designers or project managers. It keeps us fresh and keen and with our eyes wide open.

Curiosity is an insatiable well that gets deeper the more you throw in. So, dive in. Follow where it takes you. Play around. Put work out there and gather feedback, quietly toiling away at making whatever you create better. It doesn’t need to be good, it just needs to exist. It is, after all, better to have an imperfect something than a perfect nothing (just think of it like you’re working towards your MVP).

This ideology mirrors that of MBE Onkardeep Singh, senior UX designer at Three, who used his slot to tell us to be flexible, inquisitive and kind. To detach from our work and invest our time in our talents.

To learn to take feedback gracefully. We design in an imperfect world populated with imperfect humans that – as Gavin so kindly pointed out – is likely to be swallowed up in one gulp by the sun one of these millenniums, so we might as well cast aside the existential anguish and just get started. 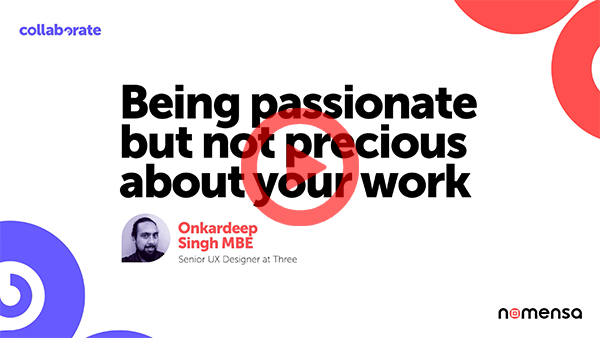 2) Never trust your number one fan

Somewhere between zealous love and absolute hate lies the true experience of a service. Juliana Martinhago, product designer at Monzo, calls these individuals ‘power users.’ These die hard Monzonies adore or despise a new update, and usually spend a lot of time on their forums. But while they do provide detailed data, when you occupy the polar end of an opinion, there’s a lot of insight left out. 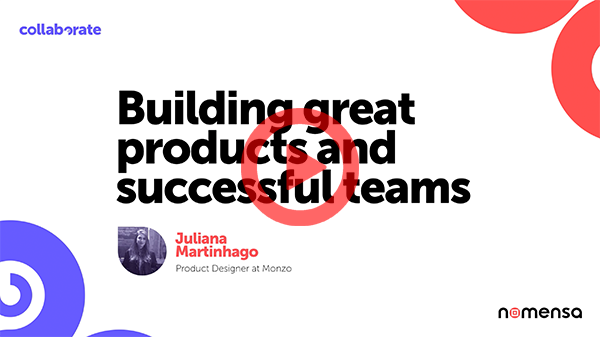 It may be appealing to only talk to warmed up users, particularly if you’ve just deployed a pretty unpopular update. But just as your mum is likely to never give you can unbiased answer, it’s the ones who hate the service that are most likely to reveal its weak spots. So, buckle up and prepare for the occasional bit of bad press. It’s all part of the process.

Hilary Brownlie, head of service design and innovation at Registers of Scotland, also provided the timely reminder that stakeholders and staff members are users, too.

So, ask the people who work in an organisation what they think of it. Find out what they love and hate and what workarounds they’ve created to avoid the latter. Include them in the process, because as Hilary so elegantly put it: “we need to design with people, not for them.” 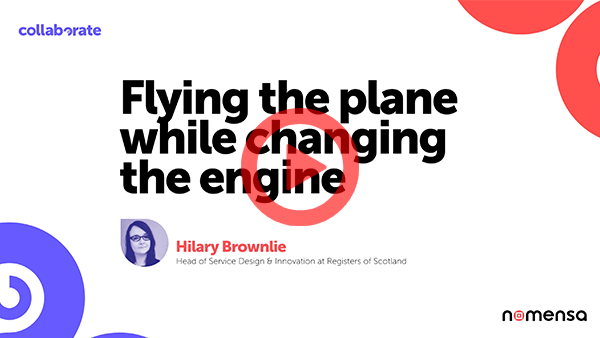 3) We’ll build our future with Blockchain

I’m not going to pretend that I now understand how Blockchain works, but I did leave Collaborate feeling very inspired by its potential. There are a multitude of commercial opportunities for the technology, but Georgia Rakusen (design research lead at Consensys)’s talk took a more revolutionary approach.

Touting it as a solution for everything from climate change to economic inequality, Blockchain can be used to foster grassroots activism and cooperation through transparency and self-regulation. 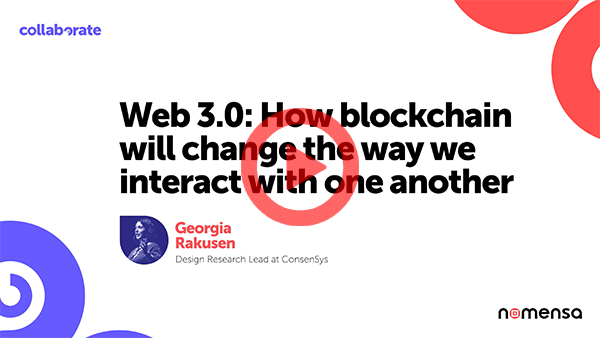 This is because as an emerging technology, Blockchain is free from the pressures and obligations of existing systems. It’s accountable only to itself. It offers an escape from third party reliance and gives the user ultimate control over their data. Blockchain is ushering in a new kind of internet – one dubbed Web 3.0. – that we hope will start to prise hoarded power back out of the hands of deeply-seated institutions.

Usually when you start to talk about processes and workflows people’s eyes start to glaze over. And I don’t blame them. I want to just get ahead and get on with the thing, too, but without adequate processes underpinning a project, we’re destined to never get our designs out of the door.

But as Nomensa’s very own head of UX, Jon Fisher, pointed out, processes and tools are just the beginning. If we’re not careful “research can become a form of paralysis” and processes an excuse for not taking charge. Using a selection of stomach-churning examples (proceed with caution if you have a fear of flying), Jon showed us just how dangerous this lapse in care can be. 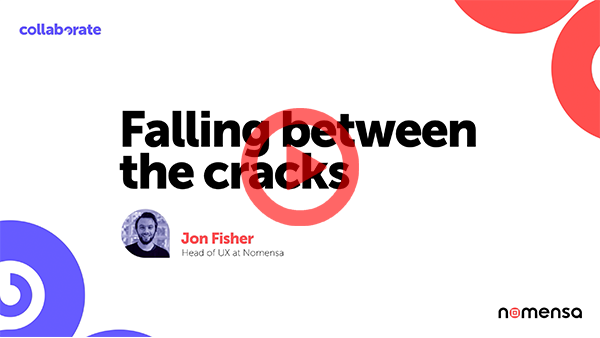 Now our learning here was twofold: the first was accountability. We care about processes that we’re responsible for. But when we don’t feel valued or included, we get restless and reckless. Mistakes are always a series of minor infractions that soon swallow up a service. This happens when we don’t take responsibility for what doesn’t fall in our department, or spot mistakes and think ‘someone else will sort it.’ As Jon so rightly noted: “the danger isn’t in the silos – it’s in the places where they touch.”

Our second lesson in the Fisher School of UX was that humans are strange, bizarre and utterly unpredictable. Research helps to dispel some of the mystery, but generally, you can plan for 30 responses to any single situation and the human will still do the one thing you didn’t expect. So, try and design around that. Factor in a little wriggle room in your designs and test plans for human weirdness.

Contrary to the cultural narrative we’ve all been eagerly eating up since Arnie told us he’d be back, AI-powered robots are not going to destroy the human race. But that doesn’t mean we won’t destroy ourselves in the meantime. At least that was one of the key takeaways of Catalina Butnaru’s talk on ethical AI.

It’s certainly true that much of the fear around AI and its robotic counterparts are more suited to sci-fi than reality. But few have articulated why quite as well as Catalina. She says AI is a cultural artefact. It is no more or less ethical or evil as a gun or a toaster. Ethics implies agency and intention.

Without human hands to input preferred programmes and behaviours, computers – no matter how seemingly smart – cannot do anything we haven’t told them to. Not that that thought should give you any comfort, given humanity’s questionable track record. 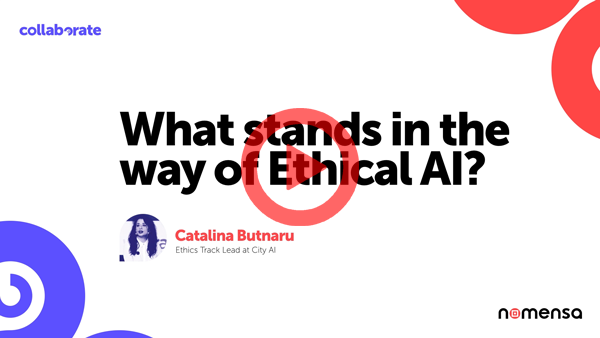 Besides, we’re not creating Frankenstein’s monster here. AI is not going to wake up tomorrow morning with a taste for human blood. These changes will come quiet and slow. We’re in control. We can unplug whenever we want. And if you needed more convincing that the robo-apocalypse isn’t coming any time soon, just look through compilation videos of Boston Dynamics bullying, I mean stress-testing, their robots. Honestly, they have more to fear from us than we do them.

6) We can and should do better, do more and go further

The day’s final talk belonged to Eriol Fox, senior product designer at Ushahidi, who took to task diversity in design. We all want to design for humanity, but more often than not we end up designing for ourselves. Luckily, Eriol was on hand to show us how to design with compassion and tackle those tricky conversations.

Even before we unpick Eriol’s talk, the company they work for is inspirational enough itself. Ushahidi is a humanitarian non-profit that uses technology to help in crisis situations and disasters. They develop open-source, digital tools that support democratic processes and safeguard human rights across the world. Seriously, take a look at their work.

If there was ever an example of how technology can change the world, this is it.

But back to Eriol’s talk. They shared their insight into how we can better facilitate these conversations and reveal the blind spots in our own understanding. The simple fact is none of us are perfect. We all have biases.

We’re all trapped in our own unique myopias. But this is why we research. We know that design choices need to be guided by evidence and not our egos. And as UXers, we should never shy away from asking difficult questions. 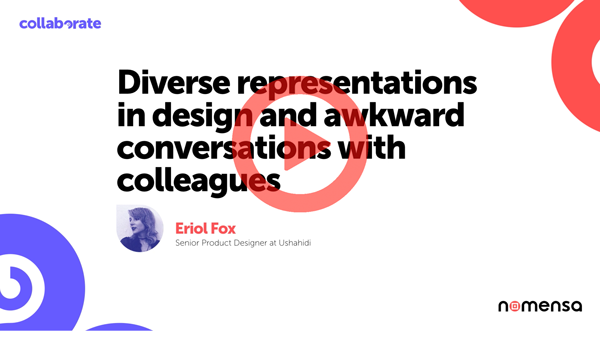 Visual representation matters wherever and whenever it manifests. Whether it’s in our illustrations, personas or website assets, we need to really examine our design decisions. We need to interrogate our choices: does our imagery confirm or dispel our assumptions? Does it challenge our biases, or cement them further?

Subtle changes give people the ability to choose, such as:

• using checkboxes rather than radio buttons to denote nationality

While small, these are invaluable changes for users. And organisations that go further will earn more than just their loyalty.

While the topics we tackled were rich and varying, there was a common thread throughout. A call to action if you will. And all these musings land us in an interesting position. One where we can either buckle under the weight or rise to meet the challenge. Technology poses an unrivalled opportunity to really make the world around us better, brighter and kinder. Question is, are you ready to do your part?

As Catalina Butnaru rightly stated, the only one with the power to change anything is you. And it’s up to all of us. Good UX means being a good human being. The best designs and services are structured around storytelling, empathy and shared understanding. It’s easy to forget the power in singularity.

The strength that comes from beginning from exactly where you are. Our differences should be celebrated and channelled into our designs. Then, and only then, will we create digital experiences that are reflective of the world as it is, not as we are. I don’t know about you, but I’m excited to see what’s next for us.

And don’t forget, if you missed Bristol’s big day, we have Collaborate’s big sister Interact London just around the corner.

Take a gander at our Early Bird tickets while they’re still available, we hope to see you there. 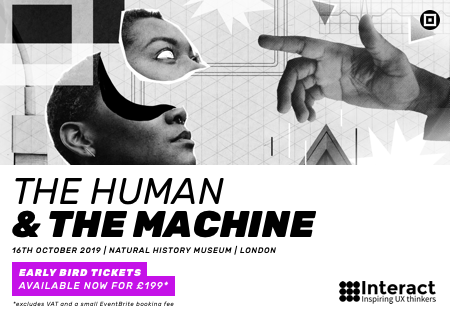