The Art of Visual Story-telling

Packed tightly into rickety, old open-top carriages those aboard the small train departed the embarkation point. Their eyes were screwed tight as they fought to re-gain focus as the bright sun gave way, albeit briefly, to what seemed like infinite darkness.

The cool, damp air of the cave hung in the air. The exact same scent likely to have adorned the nostrils of previous occupants many millennia before.

Then, through the dim light, came what appeared to be faint line drawn by hand. Then another, but this time positioned at approximately 45 degrees to the first.

Little by little, creatures began to reveal themselves until a full montage was visible through the flickering electric lights, hung like fairy lights along the length of the cave.

A little boy, sat agape as the train continued to trundle slowly and ever deeper into the cave. All concept of time lost, the little boy’s attention was fully surrendered to the scene laid out before him. It appeared to tell a story, a story of brave hunters and wild animals slain in the name of sustenance and warmth.

That was 1979, the place a small town called Rouffignac in heart of the France’s Dordogne Vezere valley. A third of a century later, the vividness of those distant memories still lives on.

That day marked one of my earliest enduring memories of visual storytelling.

Taking inspiration from these memories, I’ll be looking to uncover some of the secrets behind the power of visual story-telling and its enduring value as we shift across channels, from adorning cave-walls, to man-made forms such as architectural, print, digital and whole load of other channels besides.

Winding back the clock

So, let’s start by imagining that, through the medium of time-travel you’ve been transported some 12,000 years back in time.

You’re now one of a small band of six to maybe eight men and women who’ve crawled into a shallow cave to take cover from an impending storm. Only you and those in your group will ever know the exact reasons behind the pictures you painted in that cave over the course of that day or days.

Was it to leave an account of your lives and provide a point of learning for others in your community? Or, did you even have a reason beyond the pure art of creating a rich picture of the key aspects of your daily existence for further generations to refer to and learn from?

What’s certain is that you weren’t the first and certainly not the last to follow this path. Travelling back a further 5,000 years will transport you back to the most famous cave ‘art’ of all, at Lascaux, situated some 200 kilometres to the east of Rouffignac.

Luckily, today, we don’t have to look quite so hard.

Great feats of visual storytelling appear all around us; church windows, the pyramids, Bayeux tapestry and the published sketch books of Leonardo Di Vinci. The list simply runs on and on.

Even comic books, a central feature of so many of our childhoods (and even adulthood) practice those noble art with great aplomb. 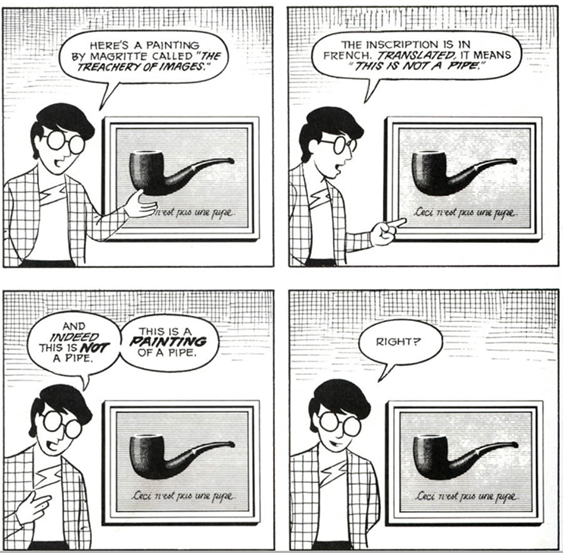 Excerpt from Scott McCloud’s ‘Understanding Comics’. Scott’s book describes the visual and representational techniques and language used in comics to convey a story. Told in comic form this is nothing short of genius.

What’s more, one can only guess at our ignorance of how many items lie as yet undiscovered, unknown to us at this present moment in time.

So, for me, all this begs the question…

If story-telling is the new black, did its visual form ever truly go away?

And, therefore, what’s driving this renaissance in storytelling?

With the plethora of visual media around us today, there’s a strong body of evidence pointing us towards the conclusion that the visual articulation of the ‘art of story-telling’ never really went away.

Ironically, it’s more likely that the sheer ubiquitousness of visual story-telling in our daily lives has actually contributed to dulling our senses and lessening of our awareness of its very existence.

After all, at least until now, it seems that our focus on ‘story-telling’ has been wedded to a concept of the written and spoken word, rather than in recognition of story-telling in its visual form.

With posed question answered, what makes visual story-telling so powerful?

To answer this next question there appears to be a number of factors at play. These I’ve attempted to loosely distil down into a set of three guiding principles:

Let’s take a look at each one of these and what the mean in a little more detail.

Convenience and ease relates to the comparative facility with which visual storytelling can be consumed and meaningfully interpreted by its intended audience.

In centuries gone by this was born out of necessity. Low levels of literacy meant that visual story-telling was practically the only way of getting your message across to its widest possible audience.

Take a trip to your local church and let your eyes wander across its stained glass windows. It’s a pretty safe bet that you’re being told a story. It’s also the reason why we have the most archetypal of vernacular art forms-the humble pub sign. 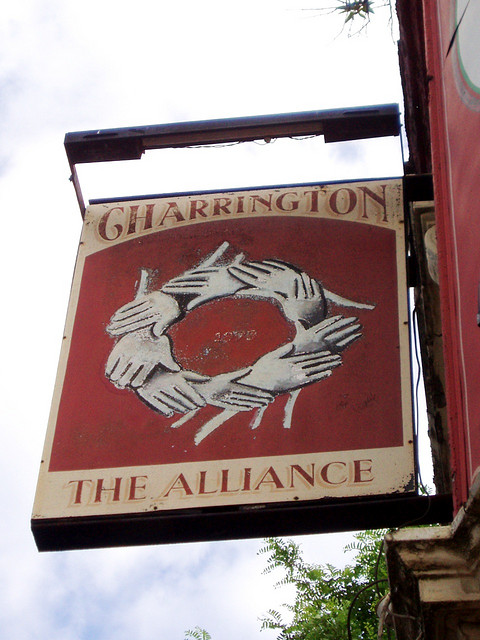 (Thought that would grab your attention!)

As a static graphic form, visual-story telling frequently makes use of representation techniques commonly associated with spatial design and architecture.

The visual example below uses axonometric presentation. This allows the publisher to render a visual story in a spatially efficient three-dimensional form and easily allows for meaningful connections to be made between the elements represented within it. 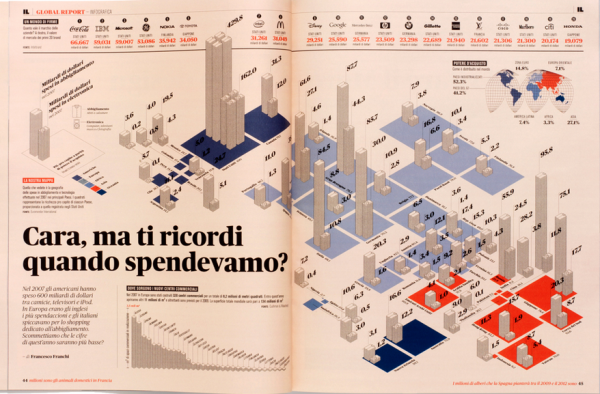 In researching for this article, I came across Francesco Franchi, an Italian ‘graphic analyst’ and Art Director at the monthly magazine ‘Il Sole 24 Ore’ in Milan. Franchi uses beautifully rendered and detailed visual narratives too.

We commonly refer to works of this nature as infographics, however the level of fidelity and content effectively conveys appears to take this to a new level. In my own opinion, Franchi’s infographics are works of art in their own right.

And, if you need any more convincing, the stats around the success of visual story telling tell their own story.

‘A message containing a visual element will yield as many as 94% more views than those without.'

2.Humanisation of the message; (authenticity, trust and sincerity)

The second principle I’m referring to as the ‘humanisation of the message’.

This comes from the fact that visual story telling can readily engender feelings of trust and authenticity or sincerity, at least two of which are primarily positive character traits associated with us as human-beings.

News Cred & Getty in their paper entitled the ‘Power of Visual Storytelling’ refer to the importance of ‘authenticity’ as one of the four key principles of successful visual story-telling.

Authenticity lies at the heart of enabling true feelings and emotions to be conveyed. It’s the very reason why user generated content forms the bedrock of so many leading brands’ interactions with their target audiences today.

This candid nature of delivering a credible message through the usage of powerful visual imagery helps create that greater sense of understanding and ‘proximity’ to those the message seeks to reach out to. It is this audience proximity which allows for deeper, emotionally-based, connections to form.

As highly marketing literate consumers of today, the desire and necessity for brands to win back our trust has become increasingly paramount. It’s visual story-telling which appears to offer a fast-track way for such brands to penetrate more deeply into the consumer’s emotional psyche and create the meaningful emotional attachment all brands crave. It’s this attachment which is ultimately the hallmark of all great enduring brands.

The fact that the target audience itself becomes an integral part of this overall brand trust eco-system, via the medium of user generated content can but only add to the potency of authentic, visual-story-telling.

The third and final point ‘aesthetic engagement and meaning’ relates to the quality and engagement of the message afforded by the visual design elements of the story as it is represented.

Whilst there are a number of obvious similarities with the first point regarding the way information is presented, I’ve consciously kept this point separate. This is to reflect the fact that great conceptual ideas, poorly executed, will never realise their full potential.

Aesthetic engagement is essentially what draws us to a visual story. It then works closely with the other two elements described above to retain our interest and attention once we’ve been attracted to it.

The ‘meaning’ aspect in this element comes through the way in which the design aesthetics relate to the context of the story and the message they are seeking to communicate.

Appropriately enough, the producers of our archetypal story-tellers, book publishers, are classic exponents of this technique.

Independent author, Joanna Penn, talks about the significance of cover art and design and the effect this can have on conveying an appropriate message to potential readers on the nature of the story contained within its covers.

In one of her recent blog postings she quotes leading independent author, HM Ward, who says,

‘COVERS ARE STOP SIGNS. They should quickly reveal as much info about your book to the reader as possible and this did not. As soon as I changed the covers to the current version, sales shot up …’

That sounds like an open and shut case for the power of aesthetic engagement and meaning.

During this blog I’ve attempted to distil down the essence of what makes a good visual story into a handful of primary elements. These, I’m confident, will help provide a firm basis upon which to undertake further investigation and research. As a result I certainly won’t be ruling out further elaborations on one or more of the elements so far discussed.

With this in mind your presence in the next chapter through the narrative which is visual story-telling would be greatly appreciated.

Until the next time, many thanks taking the time to read this. 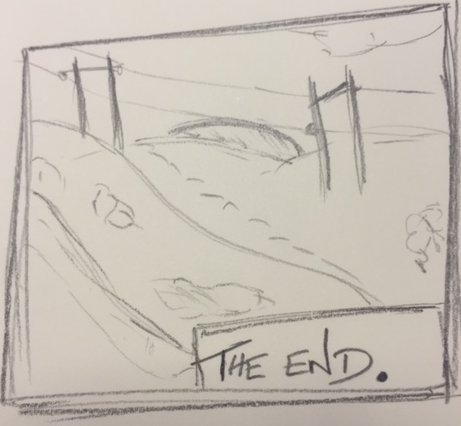