How Adobe Experience Manager (AEM) can support your experience design

Often when organisations purchase Adobe Experience Manager (AEM) for their new website, they naturally concentrate all their attention on getting their content on to the website and publishing it in an attractive way.

They’ve done their user research, testing, remapped the IA, they hopefully have a content strategy in place, some beautiful designs and everything’s optimised for the web. When their new site’s live, they sit back and breathe a sigh of relief. Time to watch all the customers come and buy stuff, and then come back again and again. After all, it’s sorted, right?

No, wrong! They’ve hardly scratched the surface of what’s possible on their new platform. Adobe is a suite of products that sit in the same place and talk to each other in the same language, producing extremely meaningful conversations and insights. But you have to embrace them and watch and listen carefully.

I’m an Adobe Certified Expert, resident in Nomensa’s growing development team. I’ve worked with an array of clients who have AEM implementations. I’ve seen clients who pop their content in to the new design, embrace the flexibility of the components, build a library, blindly create their content and then leave it. Then, there are those at the other end of the spectrum, who see their site as a place to engage with customers – new, existing and prospective. They know that nobody stays the same and that their needs on a website change, just as they do.

This means your content and site should constantly adapt to meet these needs. We call concerning yourself with your audiences needs whilst exploring how to engage with prospective customers: ‘end-to-end digital marketing experience’.

To show how a business might make full use of the Adobe Experience Cloud suite, we’re going to look at the story of Lonie’s Lunchboxes. This is a fictional account, so any resemblance to real people must be purely coincidental. It all starts right here in Bristol.

Lonie’s lunchboxes began in 2015 in Bristol. Their founder, Lonie, is an exemplary Adobe customer who truly leverages the power of the Adobe suite. Business is good, and he’s recently taken the plunge and a launched a new product: a double-decker lunchbox called the Sandwich Sandwich.

Ambrose is a very clever developer from Bristol who loves his sandwiches and takes them into work every day. However, he recently lost his lunchbox on an evening out in King Street. It’s only a matter of time before he’ll start the hunt for a new lunchbox. Let's take a look at his journey. 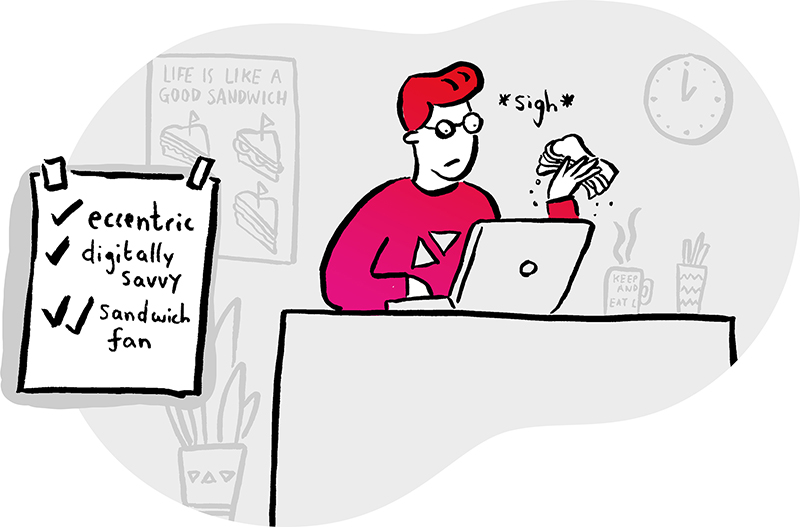 1. Ambrose is identified as a digitally-savvy sandwich fan

As Ambrose mournfully munches on his squished sarnie, he has unwittingly fallen perfectly into the user persona that Lonie’s marketer Pete has identified using Adobe Audience Manager. Specifically, the ‘Eccentric, digitally savvy sandwich fan in need of a lunchbox.’ 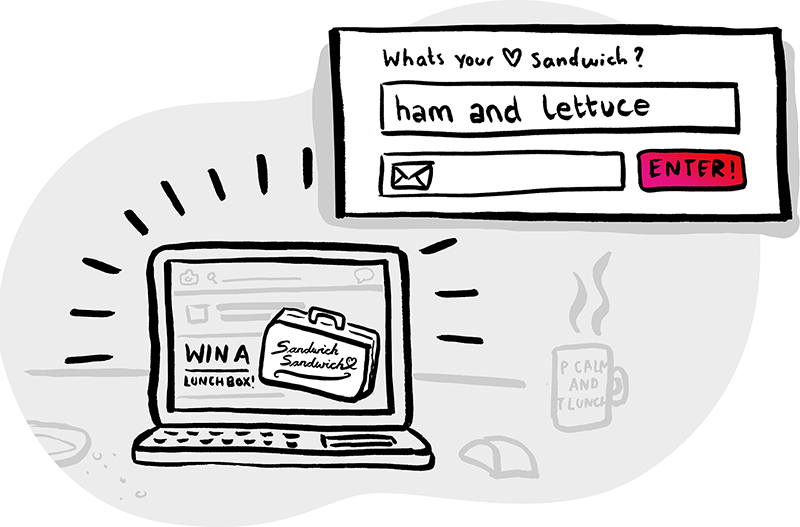 Lonie schedules a Facebook post using Adobe Social – it’s a giveaway for the new Sandwich Sandwich lunchbox. All users need to do is leave their email address and say what their favourite sandwich is.

Back at his desk, Ambrose clicks on the post and eagerly fills it in with ‘ham and lettuce’ – this being his absolute favourite sandwich (one that he eats 360 days a year).

‘Well’, he thinks, having a stretch in his chair and nearly knocking over a silent-footed dev, ‘I’ve never ever won a competition, but perhaps it’s my turn for some luck?’ 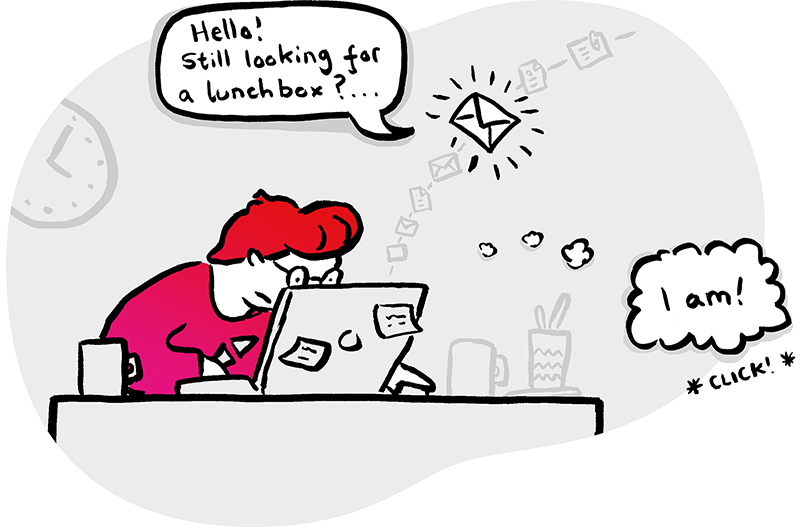 3. Lonie's email campaign arrives in the nick of time

The next week is a whirlwind of meetings, but he’s been meaning to check out what Lonie’s Lunchboxes are all about. Then, an email plops into his inbox about new Sandwich Sandwich lunchbox. Lonie has consolidated his mailing list from the Facebook giveaway using Adobe Campaign, and, when this data is combined with Audience Manager, it creates a customised email campaign for Ambrose’s audience group. 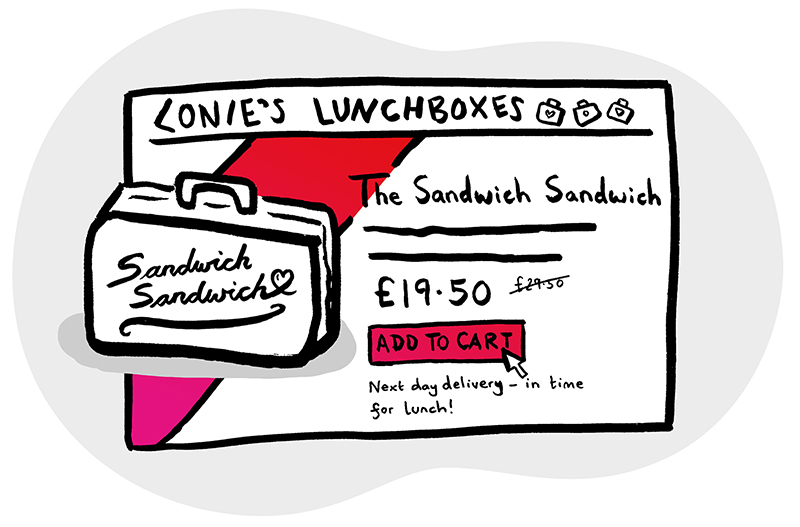 4. Ambrose gives into temptation and buys a new lunchbox

Ambrose sits back and thinks. He doesn’t normally like email campaigns, but he really, really misses his lunchbox. He clicks through to the sale on the new box on lonieslunchboxes.com.

Now Ambrose is no stranger to good websites, he makes them himself, so he’s pretty impressed by the seamless user experience and beautiful visual design on the site – all made by Lonie himself in Adobe Experience Manager. He hits buy and the lunchbox arrives the next day.

5. One year later and the analytics are telling a good story

A while later, Lonie is doing some homework around online sales of his Sandwich Sandwich lunchbox. He checks in with his marketer Nancy, who pulls up the Adobe Analytics.

They’re able to see each of the key touchpoints a user has with their brand, beginning from the first click to Ambrose buying his lunchbox. They are also able to see the success of the social media and email campaigns. Lonie is pleased with what he sees and says he will be able to launch his next lunchbox earlier than expected. This new box is called: the bagueteria (a tubular lunchbox that fits up to half a French stick). 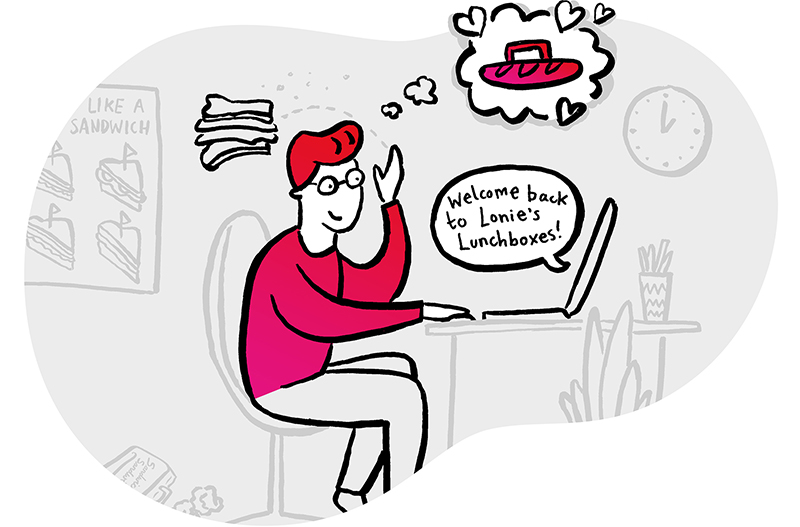 6. Ambrose has lost his lunchbox again and the Bagueteria is too good to refuse

A year later, Ambrose has mislaid his lunchbox again. He had left it in the dishwasher at work, and a cleaner had thrown it under the sink where it would live out its days amongst the lidless, broken Tupperware.

Finally, he decides to go back to Lonie’s website to buy a replacement.

Lonieslunchboxes.com knows it is Ambrose when he arrives on the site because Lonie has implemented Adobe Target. Ambrose sees a homepage, tailored to him, with all sorts of lunchbox paraphernalia related to his earlier purchase. He ends up buying the new Bagueteria because he is attracted to the ‘find my lunchbox’ feature it offers, which means if he loses his box, he can use his mobile to locate it.

Ambrose and his Bagueteria live out their days in a happy haze of ham and lettuce, tube-shaped sandwiches.

So, you see, because Lonie has used all the Adobe elements, he has created an incredibly potent armoury to speak to his audiences in their own language and keep things fresh, and most crucially, keep those sales ticking over. Happy sandwiches.