An illustration is more than just decoration: it's a communication tool, a reward, a means of providing or developing understanding, a way to deepen relationships and guide individuals through experiences. In this article, Emily Trotter - UX Designer - explains why that's just the tip of the illustration iceberg.

It’s a subject Emily will be discussing with her colleague Kate Evans in their upcoming webinar ‘How to use illustration to improve UX’ on Thursday 29th November at 3pm. Register for the webinar now.

Illustration is not just a decoration

It comes in many forms; a children's book, a retro movie poster, a clever cartoon about something in the news. A labelled picture of the human heart, a billboard advert when travelling by train, instructions for how to put your new bookcase together, or the images you enjoyed when you set up the latest app on your phone...

Illustration has a litany of meanings to different people, because it is a hugely versatile medium that we’re exposed to in a variety of situations and formats. Yet, there are still some preconceptions floating about, namely that an illustration is always just a ‘nice to have’ decoration.

An illustration can be a decoration (and decoration is a powerful tool that should not be underestimated). But it's also a communication vessel, a reward, a means of providing or developing understanding, a way to deepen relationships and guide individuals through experiences – and that’s just the tip of the illustration iceberg. 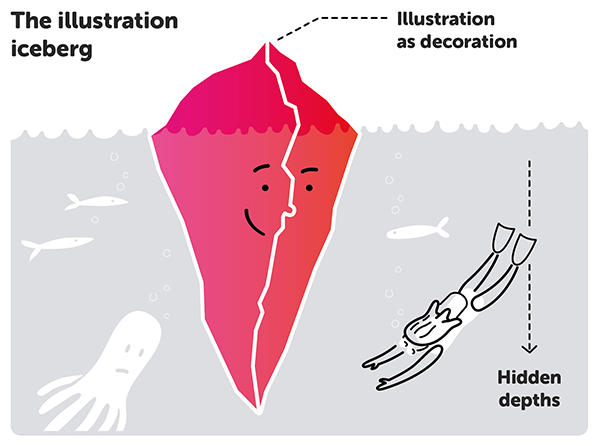 Why illustrate? Here are 6 great reasons:

1. It’s a universal method of communication

From cave paintings to emojis, we've been communicating with imagery for millennia. Unconstrained by a written language, your audience doesn’t need to learn how to interpret an illustration. An illustration can focus on an idea and deliver its meaning in a way that sometimes is not possible with a written description or a photo. 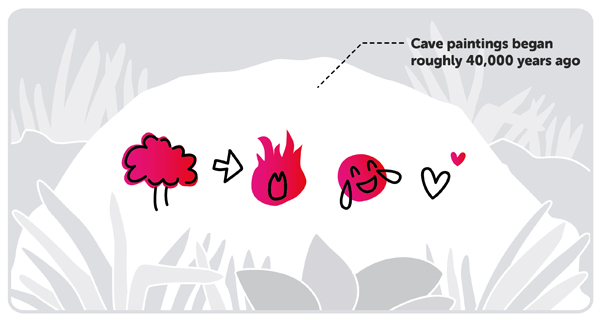 A photo might include unnecessary detail that distracts from or confuses the message. A photo is an accurate representation of a single point in time and space, whereas an illustration can convey feeling and be both location and time agnostic.

A written description may be crafted to conjure a picture of understanding in a person's conscience...an illustration can be that picture.

2. Illustration is a versatile asset in your tool box

Much like other forms of content, if considered early enough in the project, illustration can form the backbone of communication. This can manifest in a variety of ways; a conceptual scene setter (the backdrop to the main performance), a spot illustration to communicate a single specific idea, or as a series of images designed to engage and take the audience on an often educational journey.

To ensure your illustration is a truly reusable asset, devote time and careful thought to creating a style guide (we’ll go into this in a future article). Once a style is established it is relatively easy to begin producing a consistent set of illustrations that are not only on brand, but also to give back to the brand and provide a new, rich dimension of communication that can be added to without limit.

3. It’s a bringer of clarity

Think of the ‘ahhhh of course’ moments; when someone is describing something to you, you’re not quite with them... and then they draw it, and the clarity arrives. It’s a good feeling.

Imagine powering through an IKEA project if the illustrations were removed and replaced with written instructions. That would be a lot of paragraphs to read, digest and understand. In fact, your imagination would be doing the hard work to recreate those illustrations in order to achieve clarity.

An illustration can help to guide another person's understanding in the right direction. You can describe something in minute detail, but you can’t control somebody else's imagination; an illustration can bring that perimeter fence you’re building in a bit more to help people stay on the same page. In some situations this is crucial for managing expectations and/or emotions.

One of life’s joys is the ability to discover, learn and understand. A wonderful side product of using illustration to communicate an idea is that it allows the audience to discover for themselves, and own that understanding.

When you describe something to someone, you’re effectively telling them what you know; you own the status and they are a passive audience. If you allow them the freedom of discovering the knowledge, suddenly the status is also theirs and they feel a sense of shared ownership. This process encourages learning by empowering the audience and providing a reward.

5. It’s great for being inclusive

Illustration provides the power to create the reality you want. By considering diversity in an illustration guideline you open up the opportunities to appeal to a much wider audience. Illustrations can easily include references and nods to different cultures, identities and abilities.

Removing unnecessary details that might form a barrier to connecting (like backdrops that reflect a particular lifestyle), or specifically including a range of different types of detail across illustrations will allow a wider audience to engage and identify. And all this diversity can be achieved within the same consistent look and feel. If you're curious, Meg Robichaud wrote a great article on the subject of diversity in illustration.

Illustration can evoke emotion. Adding an element of storytelling to an experience is an effective way to engage an audience, and this engagement connects audience and creator. In a digital world this bridges a gap between humanity and technology.

A well crafted set of illustrations can engage the audience and elevate their emotional state. For example, celebrating a successful checkout process allows the audience to feel excited about completing a task; they may have just purchased something terribly ordinary but show them a celebratory image accompanied by an excitable line of copy and that level of emotion will rise.

Illustration is becoming a well used and successful way to handle sticky situations, e.g. “we can’t find your address”, “that product isn’t available”, “your password wasn’t recognised”. Adding illustration to convey an emotion such as regret or humour will humanise these moments and displace some of that frustration - just like in a human to human interaction. Done in the right way an illustration intended to smooth these pain points will convey a sense of quality; a brand that spends time thinking about the detail, and considering these less than pleasant scenarios must care about their user.

Let’s talk some more about illustration

We want to talk about illustration because we believe that it deserves to be talked about, and deserves to be considered as a respected way of delivering a great user experience.