In 2016 my life was a bit of a mess. That year and the following year was a very rocky period for me, a time of great change. On top of a number of personal issues, work was trying.

But I was advised that I shouldn’t do anything drastic, like leave, while there was so much going on. So I stayed where I was. And that was probably the best decision I had made for some time, despite how frustrated I was.

In many ways, ‘frustration’ doesn’t quite cover how I felt about work at that time; I was angry. Angry that the wider business didn’t understand UX or accessibility or how to get things done; angry that we as a team weren’t able to break through; angry that the project I had been on for well over a year wasn’t moving forward at any great speed.

I’m not, to be clear, talking about where I work now. At the time I was a UX Architect for a company that had decided to set up a new digital team in Maidenhead. Problems abounded. It was a place that thought there should be a dress code, except for Friday’s, which in my opinion is the most pointless approach to clothing you could take. It was something I was frequently furious about.

And that was reflected in the approach to digital. Old school. Huge numbers of meetings, projects taking years to deliver, reorgs constantly going on… and while I’d experienced this in other jobs, the culture of the office wasn’t the best either.

There were good things of course — I liked my boss, the head of UX, and many of the team members were nice people, very competent. There was just so much frustration at the system — the processes, the culture — and it was so slow, I really needed to get out. I was routinely dealing in emotion in a way others didn’t seem to be: frustration, anger; I was irritated at the thought of going into work, let alone actually doing it.

And like all the things going on in my private life, I had no framework with which to deal with any of these things.

How do you deal with all these things going on at once? People talked to me about self-care, which was an alien concept to me at the time; but I of course understood the premise, if not the term. I tried to do that, but it was unsatisfactory when it came to my thinking. All the thoughts. So many thoughts.

And then my brother gave me this: 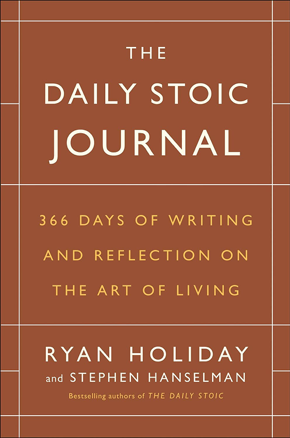 This is a journal that asks a question each day which you answer in the morning and in the evening. Not much for each — a few lines. But enough to get you thinking about something specific. There was a theme for the week and different questions each day. It was my introduction to Stoicism.

I gobbled it up, didn’t miss a day. Such a simple premise. Some of the questions might seem a bit corny, but every day you just hammer away at these themes, practising and reflecting. No one knew about it. Just me.

So, what is stoicism?

Stoicism was founded in Athens by Zeno of Citium in the early 4th century BC.

There are modern stoics, but here are some of the founding fathers — the one you always hear about.

Stoicism asserts that virtue is the only good and judgment should be based on behaviour, rather than words. That we don’t control and cannot rely on external events: only ourselves and our responses.

It’s built for action, not endless debate — not just about theorising and thinking, but actually trying to become ‘better’ — whatever that means for you. ‘More virtuous’ would be a better way to put it.

There are four key virtues at the heart of Stoicism:

How much do you wish that every leader — in design or otherwise — displayed these characteristics more often?

Putting it into practice

Actually getting anywhere with Stoicism requires practice and reflection. Here are the five things I try to do, that I try to remember day to day:

Accept what I can’t change. The most liberating and empowering thing I’ve ever done for my tiny mind. I’m not perfect at it, but it’s the first thing I go to. Once you realise that you can’t change the past, you can learn and move on from it. I can’t change my mistakes, that’s out of my hands now

Reduce wants. It’s so easy to think about the ideal world, but the thing is, nothing gets done in the ideal world — because it doesn’t exist. Life is messy, design is messy. You have to get on with it regardless

Get a little better every day. Work out what your organisation or your CV needs and chip away. Three months will fly-by and who knows? by that point you might have something really valuable to offer

What can go wrong…. Might. Planning. Plan for everything. It helps when dealing with things when they do (inevitably) go wrong

Practice silence. It’s important not to wade in all over the place, talking over people’s knowledge with my opinion. But more than that, for me, if I’m talking I’m not listening. And if I’m not listening, then I’m not learning

If you want to be a great designer, a good collaborator, give more to your organisation or your people, I believe you should start at home. Be designerly about yourself.

If that fails, remember how Marcus Aurelius had 13 children. With his cousin. And that he said this:

“Waste no more time arguing what a good man should be. Be one.”

This blog post was originally delivered as a talk for UX Bristol. At 3pm BST on Tuesday 15 September 2020 I will delivering it again as a webinar, with plenty of time for questions. The talk itself features many more examples and depth than I could hope to cover in a blog. Sign up for the webinar now.