How seeing differently is an act of design

In the midst of the 1990s, Proctor & Gamble (P&G) approached Continuum, a Boston-based design firm, with an impossibly simple request: they needed a new floor cleaner that would give them a competitive advantage in the domestic market. It should have been a straightforward project, but what unfurled became a powerful embodiment of what happens when creativity is combined with scientific methodology.

But first, back to the story. Now, P&G were already heavily invested in research and had more PhDs under its roof than MIT, Berkley and Harvard combined. Yet, for all their knowledge, they had reached a point of creative myopia. They could not see beyond their own previous approach and products. So, its teams of chemists hung up their lab coats and admitted defeat. There were no new concoctions to create or molecules to mix up. They had exhausted their options.

Continuum embarked on their design process the same way we approach UX Strategy here at Nomensa. Not lost in the lab or buried under textbooks, but with the ones who really matter: the people who will use the product. So, they headed to people’s homes, set up their equipment and took to watching humans interact with P&G’s cleaning products. This kind of research is known as ethnographic testing.

What is ethnographic testing?

Ethnographic testing is a tremendously effective means of learning and designing, as it essentially involves researchers observing people in their natural environments. As psychologists, we strive for the most close-to-life insights as possible, and this method organically garners rich insights as it’s free of the too-often clinical environments found in lab testing.

For Continuum, their rounds of ethnographic testing entailed watching hundreds of hours’ worth of video of people mopping their floors. This may sound tedious, but the lead researcher wanted to look at the problem as if they had just arrived from Mars. P&G had the knowledge, but they had the application all wrong; Continuum took a scenario that was familiar and stripped it back to its absolute basics. They realised they had to start completely from scratch and turned their attention from the floor cleaner to the tool itself. This required them to see differently.

Then, like most ‘eureka!’ moments, theirs came from the amalgamation of creativity, opportunity and a sprinkling of luck. When a participant spilled some coffee grains on the floor and cleaned it up with a paper towel, it all suddenly became very clear: they needed a disposable cleaning tool. Their invention was surprisingly humble: a disposable mop made up of a stick and a sponge. And thus, the Swiffer was born. One of our UX designers, Kate Evans, created an illustrated version of this story. Click the image below to view full ‘The invention of the Swiffer’ full-screen. 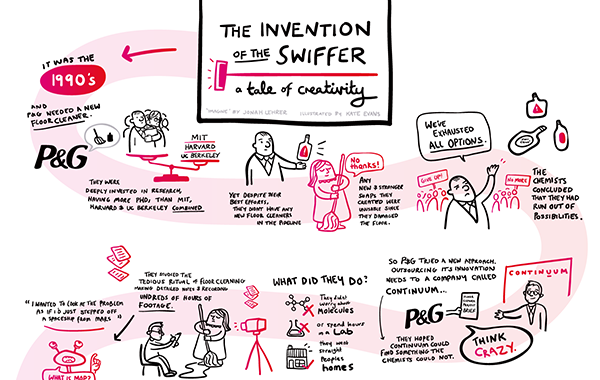 Continuum may have just invented the soon-to-be market-changing Swiffer, but they still had to convince the board. Much like when Netflix switched from DVDs to streaming, the move was a massive gamble that challenged their current business strategy, scared stakeholders and had stock prices in a chokehold. P&G were reluctant, and for good reason; mops made up a huge portion of their profits and they were not about to jeopardise their market share by cannibalising existing products. This is a problem many businesses face, especially when it comes to embracing or diversifying into digital.

Like many of the unicorn companies highlighted in our whitepaper Journeys with Unicorns, most ground-breaking organisations have faced this infamous innovator’s dilemma. Success is born in risk, but when is the best time to take the leap? In one hand P&G held a seismic product and in the other the status-quo. Finally, after much deliberation, they agreed and rolled out the Swiffer in 1999. By the end of the year, it had generated more than $500 million in sales – the gamble had paid off.

The science of creativity

The biggest lesson here is not that cleaning supplies make for surprisingly lucrative business, but rather that beautiful things can happen when we give our brains room to breathe. We can battle away with a problem, but often, like Lehrer argues in his book How Creativity Works, inspiration strikes when we least expect it. It springs when we slow down, go back to the humans that will use a design and ask them what they think. User research is intrinsic to this end; we must dig deep into human behaviour to figure out just exactly what it is that they need.

Whether we approach work as creative play or as though we’d just arrived on a rocket ship from Mars, what is most important is that we find a fresh perspective. We need to be bold and deconstruct and reassess our strategies, constantly questioning and reassessing our past methodologies. As principal UX consultant Tim Blass recently argued in his series of blogs on Seeing Differently, if we want to create something spectacular, we need to approach a problem from an equally unexpected angle: we have to free our creativity.

However, this is not to say that we should sit back and wait for our muse to find us. The greatest creations – be they books, apps or the Mona Lisa – do not happen accidently. They take practice, work and discipline. Creativity is not divine intervention, it is a process that necessitates routine. This is why the combination of creativity and the tools of modern science is so fruitful, because science allows us to be systematic with its application.