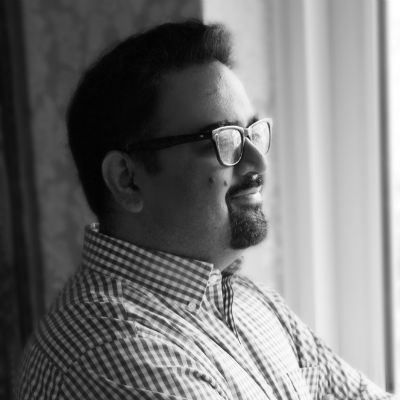 Usman Sheikh is a highly experienced leader in design, customer experience and digital strategy. Currently the Global Head of Design & Experimentation Barclaycard Future Payments, he is speaking at Interact London, the capital's leading UX, IA and design conference on 18 & 19 October at the British Museum. Save your seat at the event today >>

The first in a series where we'll be gaining an insight into Interact London's speakers, we asked Usman a few questions ahead of his talk 'The FinTech Disruptors: How the Next Generation of Financial Services are Rethinking the Customer Experience'

Are you an early riser or a night owl?

A night owl, for as long as I can remember.

What was your career break-through?

Who is your biggest inspiration?

My dad, without a doubt. I consider my work ethic and my attitude towards my career to be my biggest asset, and this is down to all that I’ve learned from my dad.

Do you set career goals?

Absolutely. I’m a big believer in having ‘five-year plans’ and then trying my best to reverse engineer my actions in order to get to where I want to be. So far the model has worked well for me.

When did you step out of your comfort zone and be courageous, and how did it change your career?

When I started my first digital agency. I was only 23 years old and looking back on it today, I was fairly naïve. However, even back then I had a learning mindset and I knew that any mistakes I was set to make would teach me something. This turned out to be absolutely true, as my second and third agencies were exponentially more profitable than the first.

What is your killer confidence tip for work success?

Genuinely believe in what you do. If you’re sold on the idea yourself and truly believe in it, then selling it to others becomes a piece of cake.

Have you learned to say no?

It took a while, but I have now. I think the ability to turn things down is something which naturally comes with experience. I’m actually quite glad that I used to be very uncomfortable with saying no earlier on in my career. By saying yes to just about everything, I managed to learn a lot more than I would have if I had turned down half of what I was offered.

As a young designer a ‘can-do’ attitude, and the willingness to learn and always participate, is always well received in comparison to those that prefer to adopt a ‘not my job’ kind of perspective.

What will the career path for young designers look like?

That’s a really tough call to make because I don’t believe there is only one path to achieving your goals. What makes a difference is the attitude and the mindset you adopt on the way. The industry (and the world for that matter) is evolving faster than ever before, so the only way to survive is to proactively enter into a constant state of learning.

The idea of life-long learning has never been more relevant than it is today. As designers we are meant to be problem solvers, and the only way for us to do this is to be better informed than we were before. So read as much as you can, attend meet-ups and other gatherings of professionals from not just your own focus area but other complimentary ones as well, build a point of view and have as many conversations as you can.

Most importantly, don’t get too precious about specific tools - be more focused on what you’re trying to achieve and be more agile towards the methods you use to achieve them.

Are more people getting into UX?

Yes – which is a good thing and a bad thing. It’s good because you can clearly see that there is a heavy demand for UX design skills worldwide, and the industry overall is maturing. Such an upturn can also lead to a particular market becoming diluted by folk coming in with unsuitable skill sets and pitching themselves as experts, however.

I am aware of print designers and even marketers, for example, trying to pass off their services as falling within the same field as those provided by informed, expert UX designers.

What skills need improving in the design/UX sector?

A good UX designer should always be looking to learn more about human psychology and cognitive sciences, and generally about how the human brain works.

Designing experiences involves a lot more than simply designing interfaces and touchpoints – it’s about storytelling and designing end-to-end journeys, so knowing more about human behaviour and the triggers that we respond to is critical to designing effective experiences.

To be or not to be…a generalist in UX?

Having been in the industry for over 20 years, it’s interesting seeing how things have evolved. We all used to be generalists back in the day, before our industry got sliced into a dozen specialisms. We are now back to a state where you need to have skills in more than one area in order to truly shine.

I ideally want my designers to be a ‘jack of all trades and king of some’. I’d expect them to have a good enough understanding of everything from conducting user research to UX and coding, to visual and interaction design, but also have one of those areas as their specialisms as well. This allows for much richer conversations to take place, while the ensuing solutions tend to be considerably more well-rounded too.

What is the next ‘big thing’ in the industry?

Who knows? My best bet would be on designing for conversational interfaces – everything from voice-based interfaces for the likes of Siri and Alexa to Messenger based interactions via chatbots and AI.

That UX and CX are interchangeable terms. It’s crazy how many times I’ve had to explain to people how entirely different these two disciplines are.

If you could trade places with another person for a day (real/ fictional/ dead/ alive) who would it be and why?

I’m not sure about another person, but I wouldn’t mind trading places with my younger self for a day so that I could leave a copy of the Sports Almanac with him and return to the insanely rich version of myself later on!

Save your seat at London's leading UX, IA and design conference today >>>