For the last couple of months we have been bombarded with figures about Apple’s massive success. Over 120 million devices sold and 6.5 billion app downloads are astonishing figures. One could think that all apps in the App Store are amazing because everybody is downloading them!  That, unfortunately, is far from true. The vast majority of apps are just downloaded to try them out, and then dismissed after some weeks or even days. 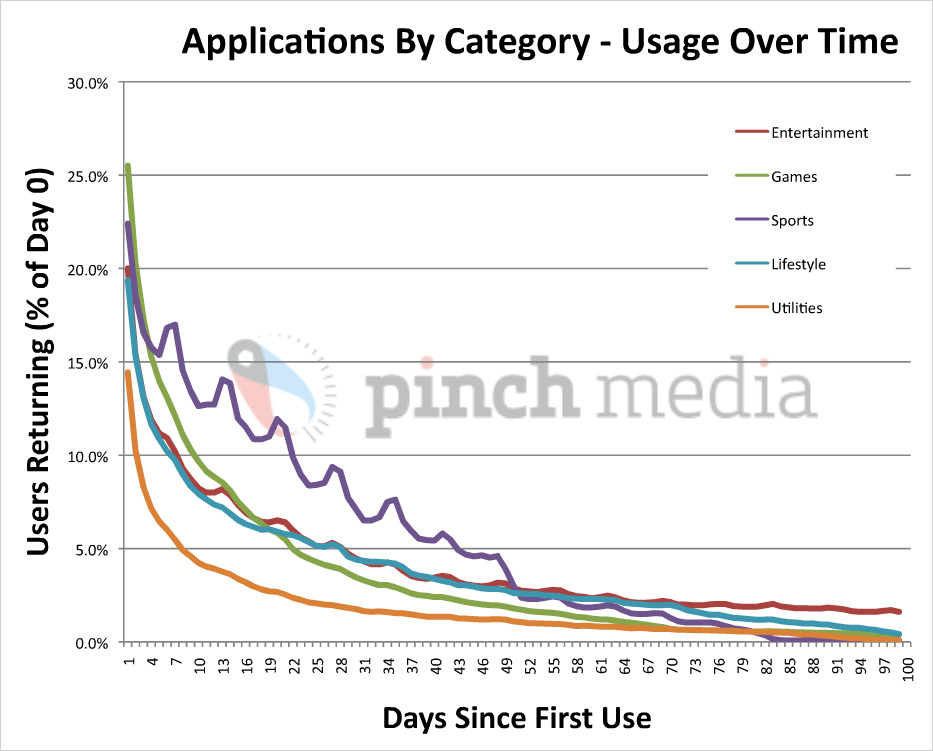 Even popular apps like the NYTimes app for iPad receive comments like this: “(the latest app now has) peek-a-boo navigation that takes a bit of getting used to. The font is smaller. Page composition feels off balance. And though there is a lot more content, registration is required”. These are simple usability issues which need to be addressed for redesign. To address app usability, Apple have written several Human-Interface Guidelines (HIG), one for each device category (including an iPhone HIG). These guidelines help designers and developers to understand how to get the best out of Apple’s devices. Extra resources can also be found, such as online UX tips for iPhone and iPad design (from how to design eReaders to how not to design applications) as well as books. All of this information is necessary to understand what users expect, but the designer is left with the task of creating something that fulfils all of the requirements this creates. As we have seen, even big companies struggle to accomplish this, sometimes resulting in apps which are hard to learn and frustrating. What are the three biggest usability issues which arise from guidelines clashing with developers and designers’ creativity?

what action each gesture should carry out, but gestures can also be customised to perform different actions. This gives way to new interactions, but it means that a lot of different responses are possible from a simple tap, with no consistency. When new responses are not explained and the design lacks any kind of affordances to hint at possible interactions, how can users know about them? Consequently, users miss most of these extra features. They can then end up feeling ripped off because they feel that they have paid for an expensive e-magazine just to read text and see pictures they can already find in a paper magazine. In reality, the e-magazine offers videos, extra pictures, a special layout for landscape mode and audio interviews, but users don’t know about it! All this results in the publisher wasting money on development time and extra content that is not seen, and in dissatisfied customers abandoning the app. 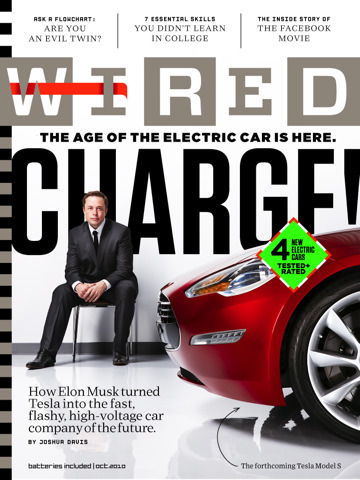 Figure 2: Wired, the most popular e-magazine at the App Store

Sometimes features of an app are designed to resemble real world objects, like a book. In this way, common knowledge about how to use the object helps the user know how to interact with the software (e.g., shopping carts in online shops). However, incorrect application of metaphors can lead to great confusion. For instance, e-magazines try to apply real world interaction with magazines to their app, such as allowing users to flick through pages using a swiping gesture. However, some e-magazines use this horizontal gesture to move through articles instead, requiring vertical scrolling to go through the pages in an article. Users have to investigate and learn how to read the e-magazine because their previous knowledge about real magazines is misleading. The desktop metaphor that we are now very familiar with doesn’t match the physical world exactly, and there are oddities that affect usability. For example, using the ‘start’ button to shut-down. But we’ve become accustomed to it. The magazine metaphor doesn’t fit perfectly either, but even worse, each publisher uses a slightly different set of interactions, resulting in even more workload for the user. There will be a process of elimination where the publishers each analyse the different methods, before aligning with the best, most consistent method. Usability testing could be a key factor for the speed of this process and who gets there first.

Immersive productivity apps: too much of an app 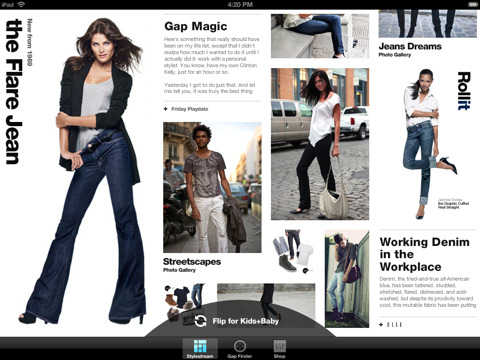 Most productivity apps in the App Store are used to browse information, for example, mail apps, to-do lists, or music players. Designers attempt to make revolutionary apps by including new, immersive features into productivity apps. Immersive apps, like games, encourage the exploration of new interactions, whereas productivity apps are usually designed to perform tasks efficiently. How do these two sets of features mix? Not well, in our opinion. GAP’s app for iPad (briefly analysed by Nielsen in this video) tries to present a clothes catalogue with a twist.  It uses an infinite canvas where pictures of clothes are laid out, following a pattern throughout the canvas. The user can scroll through this endless canvas, looking at pictures, trying to find out which ones can be tapped, or looking for extra features, like links to GAP’s twitter account. Users can get annoyed because there is no order, no logic, and no clear hierarchy; so they have no idea what they can or can’t do. The result? They stop using the application after a few seconds, with no intention of launching it again.

There are many more usability issues that we do not have space to go into; a lot of them are merely due to the fact that a product is new. One example is that a lot of people said the iPad is ‘like a big iPhone’, but novice users might view an iPad as a small laptop instead. Even the simplest action of holding the iPad is affected by these expectations and perceptions. For example in our user testing sessions, we left the iPad on a table instead of handing it to the participant. If you hand it to them, you are implicitly suggesting a method of interaction; i.e. it is to be picked up and held in a certain orientation. Instead, leave the iPad on the table at a 45 degree angle, and they will pick it up in the way that feels natural to them. Using this approach we found that most users opt to hold the iPad in profile, although many people like to put it flat on a desk, which will clearly influence the gestural interaction.

Figure 4: Suggesting an interaction method vs. Letting the user do what is natural

iOS devices are an iconic range of products and the usability guidelines have a definite rationale behind them. The interfaces are innovative and unique, and embody the 80% rule, essentially providing functionality to cover the needs of 80% of the user target . However, there are much more widespread usability issues which the majority of users will encounter. They can arise anywhere between the guidelines, the development and the end product/a>, so each app must be designed and tested very carefully. Eventually there will hopefully be agreement on UX best practices and a protocol of how to implement the guidelines, but in the meantime user testing needs to help identify and solve the problems which arise, as we saw in GAP’s app.

Returning to the 3 main usability issues, user testing can answer the following questions;

•    How do people use gestures

•    How consistent do they need to be?•    How powerful and appropriate are the metaphors?•    When does an app become too immersive?

Questions like these are only answered properly by direct feedback from real users. Testing is most effective when tackled early on. We are still faced with the ‘Wild Wild West’ in terms of iOS interface conventions in that they are still being developed and tweaked, and a widely accepted set of UX best practices have not appeared yet. It will take a long time and substantial amount of feedback from users, sales analysis, discussion among experts and iterations of design before solid platform conventions emerge accross applications.

During all this time user-involvement is even more crucial to the process; we want to understand what makes people use an app again, and what makes people exit one in a matter of seconds. Therefore we must continue to focus on users during these crucial stages to help us develop truly usable apps.