If you have walked past Banksy at Nomensa HQ on a Thursday lunchtime, you might have seen a bunch of us sat quietly hunched over our laptops, tapping away at our keyboards and eating cake with big smiles on our faces.  In case you’ve been wondering what on earth we’ve been doing and why we all look so pleased with ourselves, please let me take this opportunity to explain!

Every Thursday for an hour at 1pm, those of us that have time converge and get involved in a Twitter chat created by UX’ers to discuss pressing issues related to the discipline and industry – it was imaginatively named #UXDiscuss.

For those of you who are unaware of what a Twitter chat is, there is a clue in the name.  It’ s basically a conversation that takes place on Twitter using a hashtag as an anchor, so that everyone can see what the participants have to say about the topic in discussion.

I like to think of using hashtags in this way a little like creating a virtual campfire that everyone sits around to listen and get involved in relevant discussions.

Hashtags are nothing new on Twitter and if you use the platform, you will see them cropping up all over the place as a way to create order in what can often seem like a chaotic environment.

Here’s a great example of what I mean:

All of the blue text in the Tweet is clickable; there are two hashtags and a link back to the organiser’s site. If you were to click on ‘#UXDiscuss’ you would be provided with a collection of chronologically ordered tweets that also contain the same hashtag. 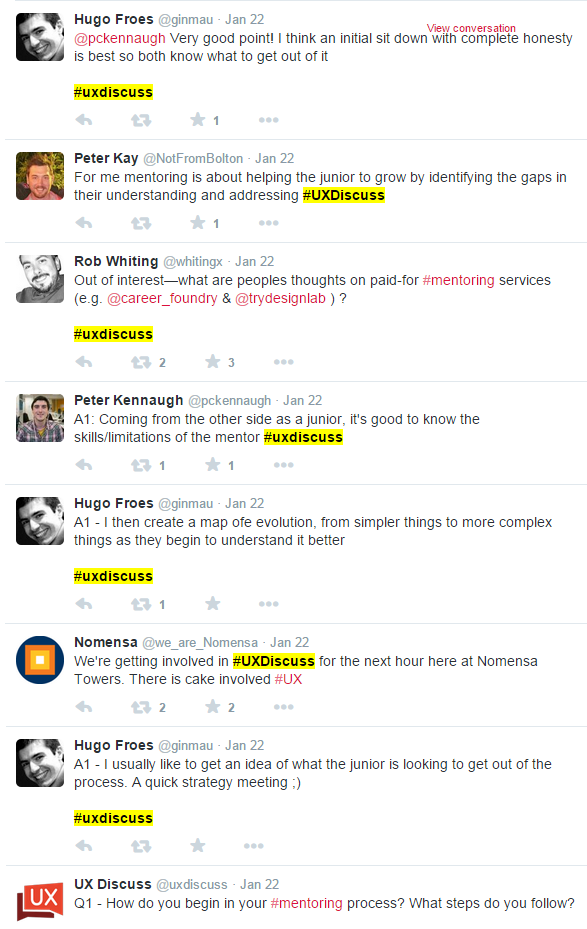 It’s a stream of related tweets pulled together from across the network, making it a little easier for users to make sense of what is going on and to draw in tweets from accounts that they are not necessarily following.

#UXDiscuss is not something that was created by Nomensa, it was discovered as I was reviewing the hashtagged tweets relating to Collaborate Bristol or #CollaborateBris. They had slipped it in there as it was another virtual campfire that was populated with UX’ers so an understandable place to draw attention to what they were doing.

So, I know you are all thinking ‘If Nomensa didn’t create it why on earth are you involved?’ Basically the answer to that is fairly simple, beause it’s good for the practitioners that get involved and by proxy has a positive impact on the company.

How? Well, it might surprise you that there is more to twitter than sharing amazing pictures of cats. In all seriousness, Twitter is an environment that is full of people creating and consuming content at an incredible rate. It’s a digital space that mirrors society and like the web within which it resides, is a space you can find every possible thing you can think of and many that you can’t.

Twitter is an environment that is personalised to every user so   for UX’ers or those interested in UX, finding UX related issues can be difficult because it’s so ‘noisey’.

As it happens at the same time every week, it grows as other UX’ers fall across the activity and they get drawn in too.

You can clearly see how the ‘community’ is growing if you have a look at the activity that has taken place around the hashtag so far this year.

Consider the broader benefits of getting involved in #UXDiscuss, such as improving the knowledge base and reputation of our practictioners, focusing their twitter use and collectively increasing the social media footprint of the brand, you can begin to understand why I have been championing it since the beginning.

It’s early days yet but over time #UXDisucss will grow to be a very lively Twitter chat, pulling in participants and their audiences from across the globe and an activity that will create many opportunities……watch this space!