Wearables: The Lack of User-Centred Design in Apple Watch's Apps

Confessions of a new early-adopter

In May last year, I became an Apple Watch owner. Although I’ve shied away from being an early adopter in the past, I have always been fascinated with the increasing significance of technology in people’s lives. This has peaked recently with the (less than successful) launch of Google Glass and the ever increasing number of wearables available on the market. Therefore when Apple finally announced the launch of the Watch, I went against type and turned this fascination into something more practical.

Experiencing first-hand how the Watch has become a part of my everyday life has given me a new perspective about a number of different topics about wearables in general – from why there has been a less than stellar start to the Watch’s life, through to how wearables interact with other technologies and what our ever increasing exposure to wearables will mean in the future.

Trying to put all of that into one post would be too much for even the most ardent fan-boy to read, so as the first in a series of three, this post will focus on why I think the Watch has struggled to dominate the wearables market.

Although it was a new device, I have a low level of expectation for the Watch – as a new device, there was surely going to be some bugs I would have to live with before a software update came out with the required fixes.

However watchOS 2 has been out for a while and my feelings have yet to get beyond indifference; certainly when compared to the impact of the iPhone 3GS as my first smartphone (told you I wasn’t an early adopter!). I enjoy seeing notifications at a glance rather than having to get my phone out, and seeing how my heart rate changes when I sleep is very interesting. However beyond this there is no argument I can currently make for people to get one.

I believe one of the biggest problems has been that designers and developers have pushed to make sure they have created something for the Watch, rather than something useful for the Watch. In this rush, there seems to have been little consideration for even the very basics of user-centred design:

Using these three principles I have made three suggestions I believe designers and developers should consider during the development of their apps, which should help fuel the argument for getting a Watch in future.

1. Focus on the content your user wants to see

Thanks to the increase in mobile technology, our attention spans are shorter than ever. This could explain the increased use of short snappy campaign slogans instead of fully-explained political policies and more people condensing their thoughts into 140 characters or less.

If you don’t grab your audience’s attention, you will lose them.

With limited screen space, the Watch is better placed than other devices for framing a message to fit this new normal. However I find a lot of current communications are failing to do this, with the biggest offender being email notifications.

Looking at notifications on the Watch is a momentary experience – there should be enough information presented in a format that makes it clear to the user what the next action is. However due to the stripped-back text only display, designers have very little scope to use CSS and other interactive elements to fulfil this brief. Instead, there is far more importance to using the right words in the right structural hierarchy (save us H1, you’re our only hope!).

These two examples show how this has not been achieved. The left hand version has used good hierarchy to promote the subject, but poor sentence structure meaning the key piece of information (the event) isn’t shown. The right hand version has used better wording but no hierarchy, making it difficult to see in an instance what I should be looking at.

An example of this being done well is given below with the email from Ribble Cycles. Like the NewsCred Events email, the subject line is given visual priority. However Ribble has explained the reason for the email in just 7 words. Once this has been processed, the other piece of information needed to decide what to do next is the sender, which is styled as the second hierarchical element. 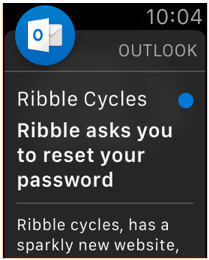 In summary, at a glance I know who the email is from and what it is about. This gives me all I need to decide what my next action will be.

This expands on the first point – once you’ve grabbed my attention and I’ve understood what to do next, that next step should be limited to a momentary interaction.

This is a critical difference that I have experienced between the Watch and my phone; I can happily spend hours using my phone without any worries other than a rapidly decreasing battery level, whereas spending any more than a minute using the Watch leads to quite a sore arm (try reading the rest of this post with your arm raised, and you’ll see what I mean!).

The size of the screen and limited amount of processing power also contributes towards the need for a momentary interaction. Any prolonged use involving a number of different steps quickly leaves you feeling frustrated by the constant need to scroll through text or from staring at yet another loading screen.

Whilst native apps and greater processing power will help reduce the problem of loading times in future, there is little that can be done about the size. The 42mm Watch has already reached a ‘comfortable’ size for the wrist and there is little scope to make the font smaller than it already is. Therefore the need for a ‘design for moments’ mentality, focused on providing the audience a way of completing their key tasks, is essential.

An example showing this done well is with OVO Energy. Rather than trying to replicate showing all billing and usage information, they have focused on the key task of submitting meter readings. This results in an app that loads quickly and immediately provides an input screen (shown below) that allows the user to complete their task.

3. Use a suitable interaction method

The Watch launched with a number of different interaction methods, including the much heralded digital crown, a touchscreen with ‘Force Touch’ technology and the more traditional side button. However thanks to it having to be worn on the wrist, using any of these physical interaction methods turns the Watch into a two-handed device.

Whilst this might not be a bother when you’re sat on the train reading the news or using Apple Pay at the till, it makes using the device very difficult when walking home with a bag of shopping or trying to hold an umbrella steady (something you see people in Bristol do more often than not!).

In these circumstances I’ve found that dictation and voice interactions have become an increasingly important way to interact with the Watch. Now that Apple has enabled access to the device’s microphone and speaker with watchOS 2, dictation should be seriously considered as a primary means of interaction by developers in future. Returning to the OVO Energy example from before, they have done just this having identified that most meters are not in the most accessible places to allow a meter reading to be inputted easily using a keypad on the touch screen. 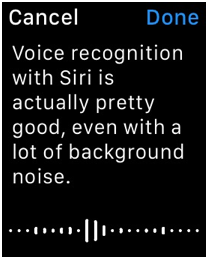 However, care must be taken with dictation and voice interactions, more so than physical forms of interaction, because they are not private. It is vital that designers and developers understand their app’s context of use, as users will have to be comfortable with the voice commands being used and the situation they will be in when using the app (as OVO Energy understood, with users being in a private setting when looking at a meter). Even with this understanding, there will always be some who are uncomfortable with using voice interactions so ensuring there is a secondary interaction method available is a must.

This post has highlighted some serious failings with apps currently available on the Watch as a result of not following simple user-centred design principles, and made suggestions as to what designers and developers need to consider in future.

I’ve painted a pretty bleak picture of the Watch in this post, although there are some great apps out there that have really understood what the device is capable of and what their audience want to do. Often this is by considering the Watch as one device as part of a larger system, which I shall discuss in more detail in the second post of this series.