I’m coming back. With friends.

If I cast my mind back 15 years, the concept of carrying a sophisticated super-computer, HD camera and telephone, all wrapped into one gadget that fits in your pocket, was the stuff of science fiction.

It’s not magic of course, just tech, but when we take automagic for granted, we often lose sight of how far we’ve come.

We’ve come a long way, and the next stage of the journey is going to be even more remarkable.

This year I’m bringing an interesting talk to you called 'better than humanly possible.' One that embodies (maybe literally) my mantra of ‘Don’t do things better, do better things’.

A case-study about something that hasn’t just changed my approach to design, it’s changed my perception of what it means to be human in today's data-powered world.

It’s a technology story as it should be told and I hope the story changes the way you think about the potential of what technology could be. It’s the story of Ai (Artificial Intelligence) being used to amplify the best parts of humanity, rather than erode it.

Since the industrial revolution we've leveraged technology to augment humans with the goal of maximising efficiency and productivity while simultaneously cutting costs, that’s the way it works — but the difference now is we also have the opportunity to do colossal good in the world too.

Things that we could only dream about when those smartphones popped into our pockets.

Who’s up for a talk at Interact London about that?

While many futurists and journalists have us believe that this thing we call Ai poses a grave existential threat to all of humanity, many of us at the coal-face of the industry think that Ai powered systems are merely just the tools that allow humans to improve what we do, and achieve more than we can on our own.

To me, Ai is just a group of sophisticated bits of software that enhance our human capabilities, just like electricity, those smartphone things, the Internet, and cloud computing.

Of course, Ai is radically different from these other examples I use, because even the term embodies something as fundamentally humanistic as intelligence, but it’s essential we ground ourselves in reality, to avoid both disappointment and unnecessary scaremongering amongst the public.

The type of products we’re designing at Us are helping to make humans more effective and efficient in much the same way that Ai chess programs have helped make human chess players much better at their own game. 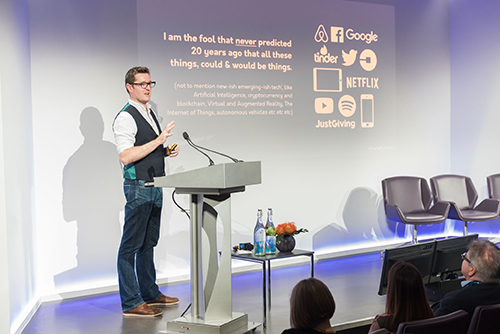 We adopted the logic that if Ai could support a human to become a better chess player, it stood to reason that it could help humans become better in many other areas too. That’s what shapes my view of the Ai future.

Not some evil singularity explosion of super-intelligence — nope, my view of the future of Ai is shaped by a disabled man called James. A friend who wanted to transcend a fragile body that had let him down, and use some very narrow Ai to do more in perpetuity, than in life. You’ll find out more in October.

We’ll have a little chat and learn how we used a self-evolving code base, on affordable cloud-based services, to make a dream a reality. The narrow uses of Ai like the ones in my story are helping humans do a lot of amazing things, I just wish the media would focus on those as much as rampaging robots.

What’s also remarkable about the Ai in October's talk is that it is already authentic. This is not another pitch story, it’s real life. Not conscious machines, emotional machines or even reasoning machines, but statistical machines that automate and increasingly outperform humans at specific pattern-recognition tasks.

Approaching Ai in the way we approach it has convinced me that all this work can be the stepping stones for future Ai systems that, decades from now, might perform feats we’ve only imagined computers could perform but will be entirely human-focused, rather than malevolent.

Of course I have ethical concerns with Ai based technology, but it’s not the end-of-days rhetoric of a few melodramatic futurist thinkers, it’s that Ai obeys the law of increasing returns.

The law of increasing returns states that the value of a network rises faster and faster as it grows bigger. The more extensive the network, the more appealing it becomes to new people to use, which makes it even more significant, and thus more attractive, and so on. With Ai, the more people who use it, the smarter it gets.

The smarter it gets, the more people use it — the problem is not that it will terminate us if it surpassed our intelligence, it’s that only a few big players (Google, AWS, Azure etc) hold all the cards. It’s companies that enter the virtuous cycle, growing so big, so fast.

Companies that will always displace any upstart competitors. As a result, our Ai future is likely to be ruled by an oligarchy of two or three large, general-purpose cloud-based commercial bits of software.

These are the facts unfortunately, but instead of dwelling on them, let’s instead approach the adoption of Ai and areas of my talk with a more holistic perspective.

Rather than the machines powered by a few corporations, and humans working independently, let’s instead celebrate what we can achieve when we make those companies, and people work in tandem toward the greater good of a person or organisation.

Trust me when I say that it’s truly awe inspiring. So buckle up and get ready for Interact London 2018. It’s going to be a brilliant, emotional, rollercoaster of a day.

See you all there!

If you haven't got your ticket for Interact London yet, get your skates on! Super Early Bird and Early Bird tickets are now all sold out.

Grab your ticket today for £249* to see talks from the leading thinkers in AI, UX, design, data and more...